Bangor becomes First City in Wales to be Awarded ‘Plastic Free Communities’ Status as it Takes Action on Single-Use Plastic. 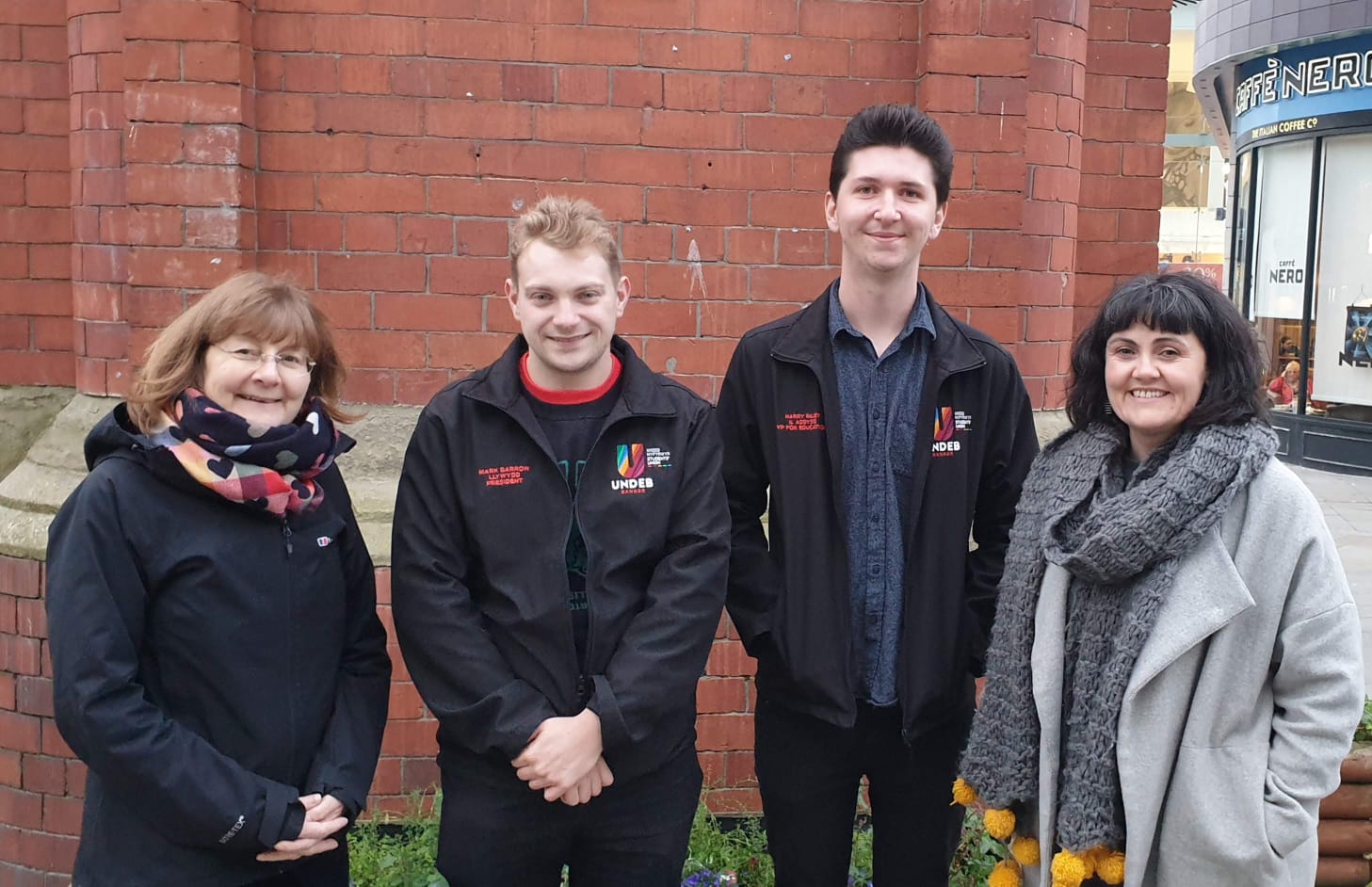 It joins a network of communities across the UK who are leading the way to tackle throw away plastic at source. The award has been given in recognition of the work to start reducing the impact of single-use plastic on the environment.

Harry Riley (pictured above - 3rd left, with Elin Walker Jones, Mark Burrow and Catrin Wager), a former student at Bangor University started the campaign while studying for a degree in Biology.

He notes: “Bangor has always been at the forefront of plastic research, and as a student it was an honour to meet and work with Dr Christian Dunn.

“As a leading academic researching the impact of microplastics across the world, and one of the founders of Plastic Research Centre Wales, I was inspired by his work to want to make a difference to the city I had come to love.  Dr Dunn became part of the steering group alongside local Councillors and then President of the Students Union, Mark Barrow.”

Working alongside other partners including Gwynedd Council, Bangor City Council, community groups, schools and business, Harry and the Steering Group amassed a large following on social media, with almost 2,000 followers and a reach of over 30,000. They held a number of events and campaigns including litter picks and beach cleans with well over 500 people attending in total.

The team has raised awareness of the impact of plastics on the environment through a number of educational engagements events such as participation in ‘Annual Festival of Discovery’ which aims at inspiring the young people of North Wales, where the group used specialised microscope equipment and sand from Benllech Beach to show the amount of microplastic pollution present.

So far, the group estimated they’ve discussed the impact of plastics with at least 3000 people since the work began, and their hard work has even been recognised in the Westminster parliament where local MP Hywel Williams raised an early day motion in support of their work.

Working towards and achieving this status doesn’t mean there won’t be any plastic in the City.  Instead, it’s about engaging in a conversation about how we use materials, how we introduce a culture of re-use and reduce our dependency on disposable items.

“There is still a long way to go, but this important first step shows the support there is for this conversation in Bangor.  Another exciting step in this journey is the newly refurbished Recycling Centre in Bangor which, when fully operational, will feature a reuse shop where residents can leave useable item, furniture and the like, and they will be available to other residents, rather than having to be placed in skips.  Plastic Free Status and reuse shops should hopefully contribute to changing the narrative around around waste in Bangor, contributing to a cleaner, greener city in the future.”

Councillor Elin Walker Jones, who represents Glyder Ward on both Gwynedd and Bangor City Councils said “It was an honour to be part of the steering group to gain Plastic Free status for Bangor, and I was proud to bring motions to both Gwynedd and Bangor City Councils asking them to support the aim of reducing single use plastics within our communities. Now that lockdown restrictions begin to ease I hope that we can all remember how important it is to re-use items to try and lessen our dependency on single use, as well as ensuring our waste and litter is properly disposed of. Lets keep the city we all love clean and green!”

Local businessman Christophere Jere runs the Belle Vue, The Tap and Spile and the Pavillion Cafe on the Pier, and he took the pledge to reduce single use plastics at his premises, saying that:  “I know that my customers are concerned about environmental issues and I’d been approached by many customers asking me to replace plastic straws with paper ones, for example.  So in many ways, as a business, it makes sense to take the pledge to reduce the amount of single use plastics we use because it’s what our customers want, but it also has a positive effect on reducing the potential for litter on our streets as well as taking action against climate change.”

Responding to the news that Plastic Free Bangor had been successful in receiving their accreditation, Councillor John Wyn Williams, Mayor of Bangor said: "On behalf of Bangor City Council, I welcome the news that the city has achieved this status.  Bangor is the first city in Wales to achieve this status, and I’d like to thank the steering group for their hard work and dedication.  We all have our part to play to protect our environment and tackle climate change by recycling, reducing waste and re-using materials, and as a City Council, we look forward to building on this achievement with our partners and work towards creating a truly green city.”

The Surfers Against Sewage Plastic Free Community network aims to free the places where we live from single-use. Using the five point plan the aim is to empower communities to kick start local grassroots action, which can then be built upon.

The marine conservation charity, based in St Agnes in Cornwall, says it wants to unite communities to tackle avoidable plastic from the beach all the way back to the brands and businesses who create it. It says it is not about removing all plastic from our lives, but kicking our addiction to throwaway plastic and changing the system that produces it.

“We have over six hundred communities across the UK working to reduce single use plastic and the impact it has on our environment. Every step those communities and the individuals in them take is a step towards tackling the problem at source, challenging our throwaway culture and encouraging the habit and system changes we need to see.”

Harry Riley added: "There is still a long way to go in making Bangor truly "Plastic Free" and unfortunately, like so many others, the pandemic has slowed work for now.

We are looking for keen locals, young people or students to get involved and use this announcement as encouragement and drive to make this even more meaningful!  We’ll be holding an online celebration of getting the status on the 18th May, and we invite anyone interested in getting involved to come along.

Further info can be found on our Facebook page @Plastic Free Bangor and residents who are interested are welcome to contact us through the page at any time.”