With sadness came the news of the loss of Plaid Cymru's political giant at Waunfawr, Eurig Wyn. But it is with a smile, that Plaid Cymru’s Gwynedd group will fondly remember this gentle, gifted, gentleman who contributed so much to the politics of Gwynedd, Wales and Europe. 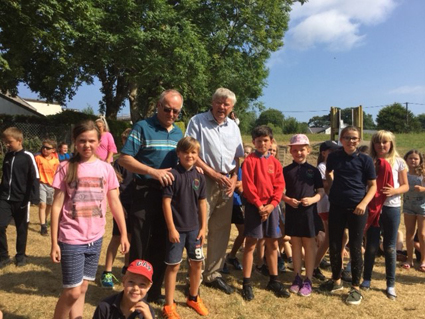 Plaid Cymru Gwynedd’s Leader, Councillor Dyfrig Siencyn said: “We are proud to have known Eurig Wyn and that he has been part of Plaid Cymru's family, since his election as Gwynedd Councillor in 1989 and then again in 2012.

“He brought enthusiasm to his work representing local people and his community and was an ambassador for fair play. A gentleman to the core, his contribution to the work here in Gwynedd was great and his love of politics, for Wales and for his own people, was unequivocal.

“We have lost one of the giants of Welsh politics and we are extend our sincere sympathies to his friends and family.”

His Plaid Cymru agent, and the one who was privileged to follow in the footsteps of Eurig Wyn as he was elected Waunfawr Councillor when Eurig made the decision to stand down as Gwynedd Councillor in 2016, Edgar Owen said: “I am privileged to walk along the same political path as Eurig Wyn. He was a loyal friend and worked hard for his local community.

“There are so many wonderful tales one could share as he was such a social man who enjoyed company and conversation. The memories are vivid. One story which stays in mind was at the time when Eurig was Chairman and I was the Treasurer of the committee trying to establish a community centre for Waunfawr.

Canolfan Waunfawr was opened in 1982, thanks to the enthusiasm of Eurig Wyn and a small group of volunteers from the community.

“I’ll never forget receiving a letter from a Gwynedd Council officer asking me to attend a meeting in the council offices before my time as county Councillor. I went there, and was offered a cup of tea. As the officer left the room to prepare the cuppa, I rummaged through the file on the table to see what exactly I was there to discuss!

“The joke was that Eurig had written a letter to the Council to discuss a grant relating to the centre, and had sent the letter in my name. But what Eurig hadn't done was remembered to mention to me, what exactly the content of this letter was!

“After the meeting and contacting Eurig to tell him how things had gone, he turned to me with his eyes full of mischief: “What ... I hadn’t remembered to tell you about the grant letter ...?” He was, without doubt, a man that did things rather than talked about things.

“On another occasion, Eurig was busy with his European work, and I received a phone call from him to ask if I would go to the Dyffryn Ogwen Eisteddfod to represent him, as he had won a prize there. The Secretary would explain everything to me. No problem, I said.

“When I arrived at the Eisteddfod having spoken to the Secretary, I immediately realised that Eurig had won the Drama Medal, and that a ceremony would take place. The hornpipe sang and I had to get up in front of everyone, receive the Eisteddfod cloak over my shoulders and be honoured in a special ceremony on the stage! I sat there listening to the work being praised and watching the children greet me with the flower dance. The leader of the ceremony forgot to mention I was not THE Eurig Wyn! We both had hours of fun retelling that tale to acquaintances for months afterwards!

“One of my proudest occasions, since my election as a County Councillor was when I invited Eurig Wyn to officially open the new Waunfawr Playing Field in September last year. He had worked tirelessly to ensure that the Playing Field was introduced to the area for the next generation, and I am so glad he joined us that day to see the fruits of his work.

“He contributed so much to Waunfawr, by raising money, by writing and lobbying, by preparing grant applications, he worked hard for the community. He had been a Community Councillor for over 40 years and we missed his company when he stepped down as his health began to deteriorate.

“We extend our deepest sympathy to Gillian, his wife, and the children Euros, Bethan and their families.”