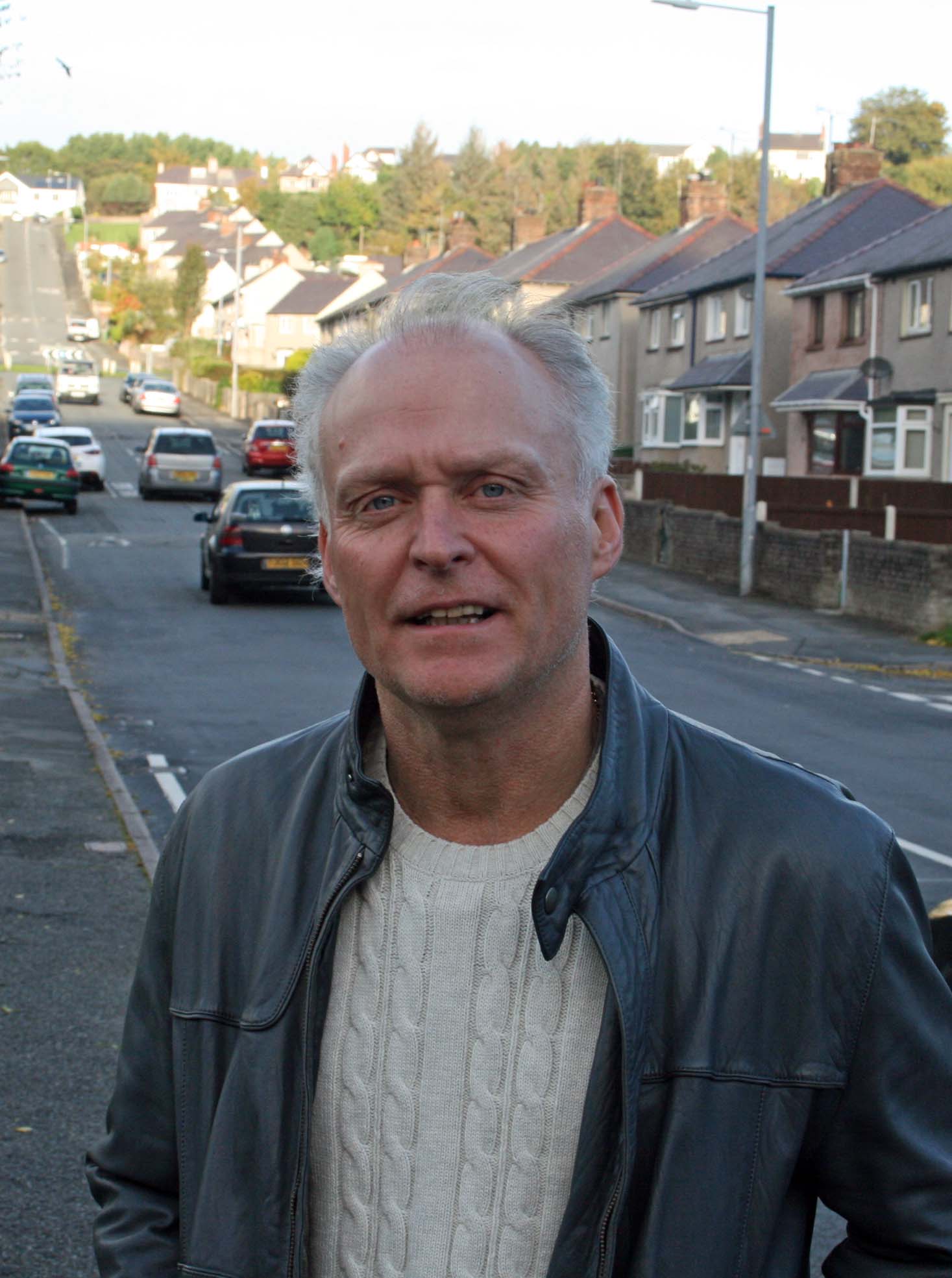 Serving the community is a family tradition for Bangor’s Dewi Ward Councillor, Gareth Roberts. Generations of his father’s family were caretakers of St James Church in Bangor so training to become an Ambulance man, and then a City and County Councillor was a natural progression for the Bangor lad.

“I continue to participate in the church’s activities, and attend fairly regularly on Sundays,” explains Cllr Gareth Roberts. “I’ve even had to sprint into action during congregation, when an elderly person collapsed. Fortunately for me, there was also a doctor present, so we were both able to assist the individual. All’s well that ends well.”

Covid19 has bought many challenges to Bangor as it has to many cities and towns across Wales.

“I have been inundated with calls,” explains Garth. “Many have been elderly people, isolated in their own homes and no family around to care for them. I’m sure I’ve taken over 200 hundred telephone calls during this period, which is much, much higher than usual.

“I’m not sure how a Councillor with a young family and a full time job is expected to cope with the volume of support we’ve been asked to provide to local people during this pandemic. It must be very, very difficult. Fortunately for me, I took early retirement as an Ambulance officer over a year ago, so I’ve been able to deal with many cries for help within Dewi Ward.

“I do worry, that the democratic system in Wales makes it difficult for young people, working mothers, single dads, full time professionals to be able to consider running for election as a County Councillor. Plus raising a young family on a County Councillor wage is near impossible.

“I certainly struggled with balancing the time management element, at times. Keeping up with all the commitments of council meetings, the local ward work demands plus council consultations whilst also working full time for twelve-hour shifts as an ambulance man, was tough!

“But we definitely need that range and variety of people working together to represent our communities.”

The former ambulance man began his career as a male nurse after completing his health and social sciences degree. For his 12 years as a nurse, Gareth worked across many of the hospital locations within Betsi Cadwaladr University Health Board and even spent time as a special care baby unit nurse.

“I spent some time training at Claire House Hospice in Liverpool too, but the majority of my nursing career was spent at Ysbyty Gwynedd, Bangor.”

Fifteen years ago, Gareth made the decision to train as an ambulance officer, and he has spent all those years working from Bangor. No day was ever the same, and his experience assisted him in dealing with the highs and lows of trauma, tragedies and ill health across north Wales.

“I enjoy the variety you get of dealing with people. And being able to assist people was always very fulfilling. In some ways those experiences have helped make me a better councillor.”

He has received lots of ‘thank you’ cards and letters during his years working within the NHS. Getting a tap on his shoulder whilst shopping at a Bangor supermarket, or sitting in a café from a patient or a family member is a fairly regular occurrence.

“I tend not to remember the person, but then when they share their story, something brings it back to your memory. People are extremely generous and grateful for what you are able to achieve during a medical emergency.”

Covid19 has bought out a different level of support needed for communities in north Wales. Local people, mainly led by Community, City and County Councillors, have worked in partnership to bring hands on practical support to local residents.

In Bangor, the support network is strong, with Bangor’s FREE Food Share open every Sunday at Plaid Cymru’s Bangor high street office, led by fellow Plaid Councillor Steve Collings between 10 and 12 each Sunday morning. Bangor City Council has plugged the gap created by the Covid restrictions, so staple foods can be bought to compliment the surplus fresh free food donated by the supermarkets. This extra support now means a delivery package can also be sent to people’s homes if they are self isolating or facing financial hardship as a result of the crisis.

Emergency food package deliveries can be ordered by TEXTING your address to: 07436 530217 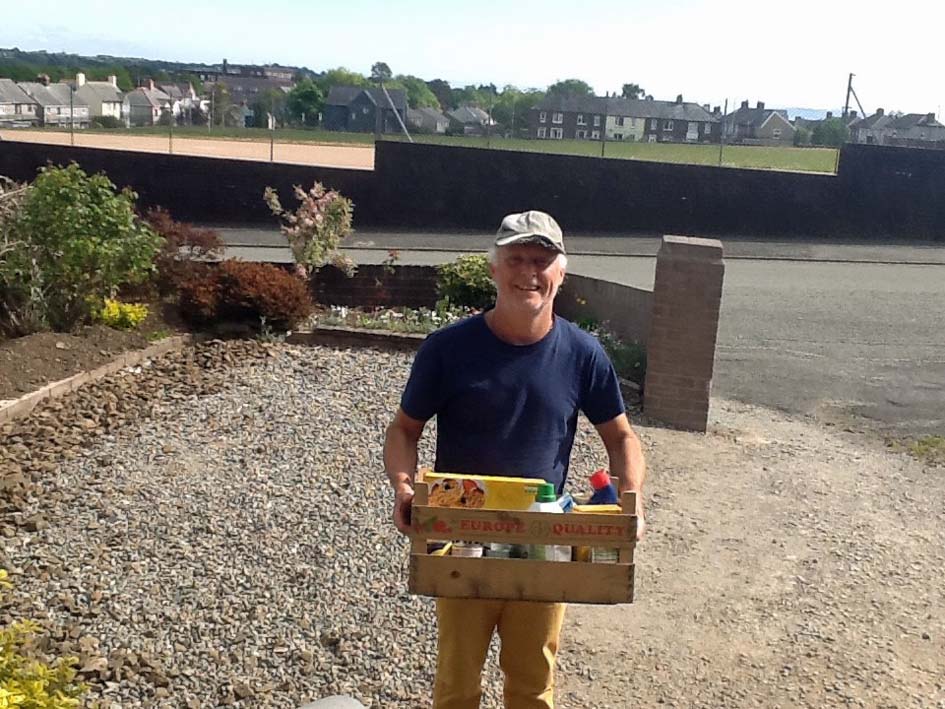 “This network has been invaluable,” explains Cllr Gareth Roberts, “and delivering these packages and other goods gives you an insight into people’s specific needs. I’ve been able to gain professional support to an individual who had early onset of dementia within my ward, after I delivered the food package to her house. With no family around to support this lady, our intervening has certainly made a difference.

“I also realised that another elderly local person I supported with prescription deliveries was struggling getting into and out of her front door. There was a risk of a fall, so together we were able to access a service to ensure a hand rail was fitted to support this lady within her own home.

“I’ve put some wheelie bins out for another frail resident, sorted out a broken boiler problem for another resident and yesterday’s calls landed me with the problem-solving task of helping someone with an infestation of fleas in the house! There’s never a dull moment,” laughs Councillor Gareth Roberts, Bangor.

One thing the Dewi City and County Councillor is looking forward to most once the restriction measures are eased in Wales, is meeting his new grandson, Isaac. At seven weeks old, a trip to Bournemouth to congratulate his daughter, Katie and her partner Mike on the new arrival, is a 2020 highlight for Gareth and his mum.