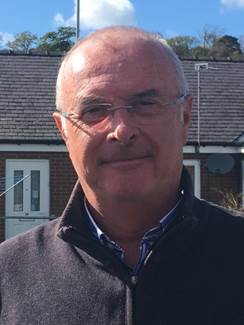 The new Bangor super ward will see a strong Plaid Cymru team keen to tackle the issues affecting local people, as they tread the streets in anticipation of the upcoming Cyngor Gwynedd Local Election on the 5 of May.

The new Canol Bangor (Bangor Central) Ward could see a population of over 7000 residents during term time, a huge challenge for the new two representative Council Ward seat which includes the whole of Upper Bangor (formerly Menai Ward), Garth Ward, Hendre Ward and half of the former Deiniol Ward which includes the upper high street.

Hendre Ward representative, Medwyn Hughes (pictured above), formerly an independent councillor, has made a decision that tackling this challenge alone would be difficult. He has therefore decided to join Plaid Cymru Gwynedd, so that together with Garth representative, Huw Wyn Jones, they become a strong Plaid Cymru team ready to stand together as Canol Bangor candidates in the local Cyngor Gwynedd Election.

Medwyn Hughes explains: “The people of Bangor and this amazing city requires strength during a challenging period. In my opinion, Bangor will not benefit from elected councillors who will not work together within the same Ward. That has been proven in other dual councillor wards in north Wales when candidates represent different political groups.

“Huw Wyn Jones and I have worked with each other in the past and we both share the same vision for our city. To that end, I believe that joining forces and pooling resources, skills and vision is the best possible option for Canol Bangor.”

Huw Wyn Jones added: “I am delighted to be working on this election campaign with Medwyn and I welcome him to Plaid Cymru’s group. As we say in Welsh ‘Mewn undeb mae nerth’ there’s strength in unity, and I believe that this plan is the best possible one for the communities we’re keen to represent. There’s a lot to do, and we’re keen to crack on, continue with projects we’ve started and begin a new chapter with fresh ideas and vision for local residents.”

Plaid Cymru Gwynedd chair, Elin Walker Jones said: “This is a great vision for Canol Bangor, and we warmly welcome Medwyn to Plaid Cymru’s strong team. As a group of councillors in Bangor, we were opposed to these changes last October that sees four representatives lost to Bangor. It makes no sense whatsoever at a crucial time for local people.

“We are, however, fortunate that Huw and Medwyn are both experienced councillors, with the ability and the vision to share workload, drive change forward and speak on behalf of local people at council level. I would urge the electors to get behind both Huw and Medwyn and look to the future positively.

“Plaid Cymru will be walking the streets and the lanes of Gwynedd during this local election campaign. We are confident that at least 50 candidates will be putting their names forward to stand in Plaid Cymru Gwynedd’s name by the closing date, 5 of April. Anyone keen to stand, should make contact with myself or the constituents offices in Arfon or Dwyfor Meirionnydd.”

Boundary Commission for Wales announced in October 2021 that Gwynedd Council representation would be reduced from 75 to 69 councillors from this coming May.